Did you know that you have the ability to build accessory dwelling units (ADUs) at Pringle Creek Community? If you’re looking for grandma to have her own space, but be close to you and the grandkids, an ADU may be the solution for your family. ADUs may also be rented out to supplement your mortgage payments. Even though they have less square footage, these smaller dwellings allow for more flexibility in your lifestyle. Portland has been leading the way for ADUs, but we’ve also got the opportunity to build them right here in Salem!

Portland’s Small-House Movement Is Catching On

The Garden House, a cottage designed by Ben Waechter in Portland, Ore., won a top design award from the American Institute of Architects. Credit Sally Schoolmaster

A simple 800-square-foot cottage in Portland, Ore., has helped focus attention on the need for affordable housing that can be wedged into existing urban spaces.

The cottage, which won a top design award last year from the American Institute of Architects, is technically called an “accessory dwelling unit,” or A.D.U. Portland has been ahead of the curve in allowing these smaller housing units, which are illegal in many cities and towns under current zoning rules.

They certainly are not seen as design statements; when such units are built in garages or basements, they tend to be dismissed as “granny flats.”

The success of the cottage, designed for Ann Wilson, 68, an interior designer, left its architect, Ben Waechter, amazed. “It was dramatic to get an honor award for such a small project,” he said. “Portland has always encouraged a limited growth boundary, so this will encourage density in the center.”

The cottage, known as Garden House, is hidden behind Ms. Wilson’s 1924 gabled bungalow, which she now rents to the older of her two sons. The cottage’s silhouette looks crisply modern: an upward-pointing arrow in a garden setting. The arrow shaft has open-plan living spaces; horizontal windows are the only breaks on its south side; and wide floor-to-ceiling doors and windows open to outdoor living space on the east and west sides.

Upstairs, the arrowhead contains the bedroom, whose floor cantilevers outward to form deep overhangs above the outdoor space below.

From a distance, the absence of trim and roof gutters makes the home, clad in gray HardiePlank, appear sculptural and monolithic.

Ms. Wilson saved money by doing her own general contracting. This $175,000 house, one of the smallest she has lived in, will allow her to age in place if she chooses. It feels larger, thanks to the indoor/outdoor design solutions Mr. Waechter developed while working at the Renzo Piano Building Workshop in Genoa, Italy, and later, at Allied Works Architecture in Portland, Ore., before opening Waechter Architecture in 2007.

More incentives followed: Homeowners could build and even rent out a unit that did not have off-street parking; any design not visible from the street could be built without input from neighbors; and new height limits — raised to 20 feet from 18 feet — encouraged two-story units, like Ms. Wilson’s.

“All that helped,” said Shawn Wood, a construction waste specialist at the Portland Bureau of Planning and Sustainability and an expert on accessory dwelling units. “We went from about 35 A.D.U. permits in 2010 to 250 in 2015.” 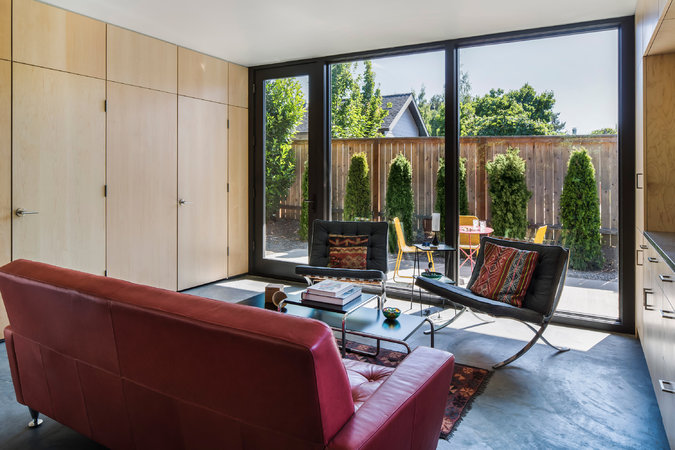 “The benefits of cities growing inward are many,” Mr. Wood said. “People can take advantage of existing infrastructure and maintain old neighborhoods.” And residents can downsize and age in place.

The Garden House has been influential, especially on the West Coast.

According to Daniel Garber, an architect in Palo Alto, Calif., and former city planning commissioner, “most Bay Area communities now allow A.D.U.s. Only Palo Alto has not yet caught up with its northern neighbors in liberalizing A.D.U. construction.”

Not surprisingly, the concentration of accessory dwelling units has been in central, higher-income areas close to amenities like transit and shops. “Part of this could be due to the fact that people with large amounts of equity can more easily secure financing,” Mr. Wood said. “The City of Portland and Portland State University will be working on a project to encourage and facilitate A.D.U. development in more diverse neighborhoods.”